At Abto Software we invest heavily into the initiatives that motivate and inspire young people to pursue careers in science and technology. Today’s post will let you have a peek at the research project our R&D engineers developed together with the students that attended our latest computer vision workshop.

Classic jigsaw puzzles, while being a simple hobby and entertaining pastime, are of great educational value for the human brain as they train its pattern recognition abilities, improve coordination and develop spatial awareness. Since in computer science pattern recognition is typically solved by image processing, our R&D engineers decided to develop a computer vision program for the automatic assembly of a jigsaw puzzle. Despite being only a workshop project, our automatic jigsaw puzzle solver has a number of potential applications, among which reassembling of damaged documents and stitching satellite images into maps.

The developed program assembles a jigsaw puzzle from the image of its pieces laid out on the blue piece of paper as shown in Figure 1.

Note that we don’t use the image of a complete picture for a reference. The proposed method of automatic puzzle solving comprises the next modules:

Let’s analyze each module to see how it contributes to the final result.

Module I. Cropping Out Puzzle Pieces

After converting the input image (Figure 2a) from BGR to HSV colour space our computer vision algorithm detects and removes the background colour that allows creating an inverted mask for the puzzles. Next, the algorithm performs a contour search and saves a vector of 54 separate contours as split puzzle pieces (Figure 2b).

While the puzzles were split apart and cropped out in the previous module they are still chaotically rotated. In order to align them, our computer vision algorithm needs to locate the interlocking parts of puzzles – inner and outer locks. First, the program calculates the convex closure of the puzzle (blue line in Figure 3) and computes its convexity defects – the deepest points on the contour (red dots in Figure 3). If the distance from the convex hull to the defect is insubstantial, that is smaller than the error margin – epsilon, that point is not considered to be a defect.

Now it is obvious that each inner lock is described by one convexity defect and each outer lock – by two. Thus, the next step of the algorithm is to check whether the contour between the two consecutive defect points resembles a circle. For this purpose, we calculate the circularity rate for each of the contour parts, that is the area of the part divided by its perimeter squared. If this part of the contour resembles a circle, its circularity rate must be close to 0.08:

If so, that part of the contour is considered an outer lock and the adjacent convexity defect points are discarded.

To detect the outer locks the algorithm makes the next steps:

Having pinpointed the inner and outer locks of the puzzles (Figure 4) we proceed with aligning puzzles in the upright position.

In order to find the center of mass of a puzzle piece, the algorithm approximates the piece with a rectangle by filling its inner locks with white color and its outer locks – with black color. Then it calculates the width, height, and rotation angle α of the piece (Figure 5).

This information allows us to determine the transformation matrix for each of the puzzle pieces and align them in an orderly way (Figure 6).

As the puzzles are still rotated randomly we need to consider any possible orientation they may take in the assembled mosaics. So the algorithm rotates and saves 4х7 copies of each puzzle: it rotates each piece by four quadrantal angles and additionally by ±3 degrees for every rotation.

Finally, we get down to assembling the puzzle from its preprocessed pieces. The program considers all 54х28 puzzle pieces and deletes the unnecessary copies only after finding the correct orientation of the piece and placing it in the final picture. To achieve this the algorithm makes the next steps:

However, we can reduce the number of erroneous placements by adding another fit criterion. During this stage, we have taken into account only the geometry of the puzzles. Let’s now consider the colour of puzzle borders too.

To match the puzzles according to the colour of their borders the program first extracts the four borders from each puzzle piece. Then averages the colour values of several edge pixels along the perpendicular to the border and saves them in a vector of RGB values that are normalized to the uniform length (Figure 9). These vectors serve as colour descriptors for the puzzle pieces and since they don’t change with the rotation we only need to calculate and save 54х4 vectors.

Now the algorithm can also estimate the colour match while compiling a rating of the best-fit puzzles by calculating the difference between the corresponding values of colour descriptor vectors. However, due to the fact that the vectors were built by traversing the puzzle in a clockwise direction, we need to flip one vector prior to comparison, as shown in Figure 10.

Just like this our computer vision algorithm is able to solve the puzzle under user supervision shown in Figure 8.

This last module does not contribute to solving the puzzle but rather creates a visual representation of the achieved result by defining the transformation function.

These computations produce 54 transformation matrices and allow us to visualize the path of puzzle pieces from their initial positions (Figure 2a) to the places they take in the final picture as shown in the video below.

Did you like our workshop project? Would you like to be involved in the next one? Stay tuned for future workshops and internships – check out our news releases, careers website, and Facebook page.
Summary 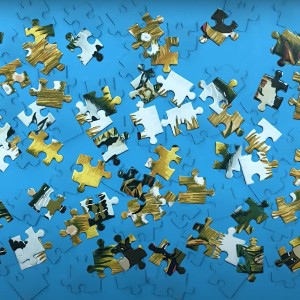 Our R&D engineers developed a CV program for the automatic assembly of a jigsaw puzzle together with the students from our latest CV workshop.