62% of Abto Software employees graduated from Lviv National Ivan Franko University — the Ukrainian oldest continuously operating university and one of the most powerful centers of education, science and culture in Ukraine.

The ACM International Collegiate Programming Contest (ICPC), a multinational, team-based, programming competition, sponsored by IBM was held in Florida, USA, in May 2011 under the auspices of ACM (headquarters at Baylor University in Waco, Texas). The aim of the contest is to provide college students a possibility to compete with students from other universities worldwide in order to advance their programming problem solving skills and learn to work as a team.

Teams of students together with their coaches represented their institutions after competing in Local and Regional Contests that are held from September to December each year. Afterwards a programming team could participate in ACM International Collegiate Programming Contest World Finals, traditionally held in March or April. The contestants had to deal with different kinds of challenging visual, interactive, competitive programming problems.

The results of the World Finals were determined by judges who checked the correctness of the submitted runs. The World Finals programming language tools included Java, and C/C++. In fact Zhejiang University claimed the first place in this competition. The World Champion team was awarded $12,000. Each of the other three Gold Medal teams awarded $6,000. Each Silver Medal team awarded $3,000. Each Bronze Medal team will awarded $1,500. 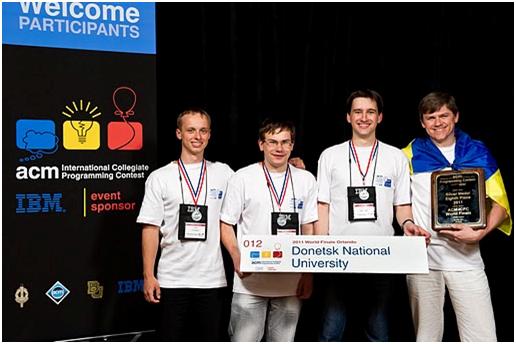 Ukraine has more than 800 universities and colleges. In the 2011 ACM International Collegiate Programming Contest Donetsk National University (Donetsk, Ukraine) won one of four silver medals, and Lviv National Ivan Franko University (Ukraine) ranked 13th which is at the same level as Carnegie Mellon (also rated 13th). It is interesting to mention that Massachusetts Institute of Technology (USA) ranked 27th place.

Lviv has almost 40 higher education institutions training roughly 130,000 students. Approximately 15,000 graduates each year are specialized in IT, Engineering, Applied Sciences, and Foreign Languages. We are proud to claim that 92% of Abto Software employees have higher education and 62% of them are the graduates of Lviv National Ivan Franko University (65% have master’s degree, 11% are post graduate students) — one of the most prestigious educational institutions in Eastern Europe.