September, 16th, 2012 — Lviv, Ukraine — Abto Software received its 3-rd place award in Lviv IT Cup 2012 of “What? Where? When?” contest. This contest of intelligence and team spirit dedicated to the Programmers’ Day celebration commonly takes place in Ukraine on the 256th day of each year. This year the 5th smartest developers’ competition was held on the 15th of September in “Degusto” cafe.

The contest was organized by “Club U3”, a group of dedicated students from Lviv National Ivan Franko University and traditionally was sponsored by Abto Software. Teams from nineteen Lviv IT companies gladly competed for the IT cup — 2012 in this demanding tournament. Among them: Abto Software, ELEKS, Lemberg Solutions, SoftServe, Consensia, Epam, Skelia and some others.

Abto Software has long-term experience in participating in such kind of IT events which have become traditional for a number of Lviv software development firms. It’s already the fourth time when Abto wins a prize place for its professionals’ great erudition and team work.

Oleksandr Muzychuk, the CEO at Abto Software, proudly notes: “We’ve always readily supported various IT events and contests, as we consider them really helpful for developing non-standard, creative thinking and elevating our team spirit. We are really proud of our experts, whose talent pool has recently grown up to 100! ” 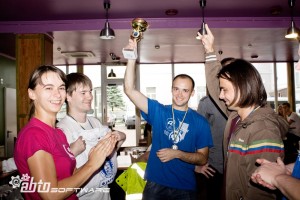