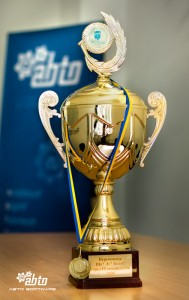 September, 9, 2011 — Lviv, Ukraine — Abto Software, a global provider of IT outsourcing and high-end software development services, announces that it sponsors the 4-th IT Cup 2011 of “What? Where? When?” contest which will be held in Lviv on September, 17th. The contest is organized by Lviv National Ivan Franko University and dedicated to Programmers’ Day traditionally celebrated in Ukraine on the 256th day of each year (September 13th or September 12th).

IT Cup contests have become one of the traditional events for the most active IT industry representatives. Software companies tend to participate in such tournaments annually as developers’ contests are considered to be an integral corporate event in many IT firms. Among Lviv companies providing software development services the following have already registered: SoftServe, Abto Software, Devcom, Conscensia, ELEKS Software, Lvivmedia, “RTFM”, Lohika, N-iX.

The contest is held in Lviv the fourth year in a row. This year it is organized by “Club U3”, a group of students from Lviv National Ivan Franko University, and Abto Software whose team has already experienced winning gold medals in such competitions. Pizzeria “Takamaka” will be hosting the participants of IT Cup 2011 while Abto will provide the winners with valuable prizes. The teams of 3-6 programmers from one company will need to solve 48 (3Г—16) computing questions.

Oleksandr Muzychuk, the CEO at Abto Software, notes: “Our team of software developers proved to be really strong. We won the gold medals in IT Cup 2008, took the second place in 2010 and the forth — in 2009. Our company pays special attention to this kind of events as they help us to develop our team working skills and develop intellectually finding non-standard solutions to extremely sophisticated tasks. We are proud that our software developers aggregate to the young brain power of Lviv and the whole Western Ukraine.”